San Diego Comic Con has been a really wonderful and amazingly awesome experience. As a first-time goer, there was tons to do, with little time for rest. And I’ve been to my fair share of conventions. I’ve been going to Anime Expo since 2006 on and off up til the present, as well as to E3 this year and last year (which was amazing when I first went but has since dulled this second year), and then to some smaller conventions such as ALA, AM^2, and APE, and big ones like CTNX, GDC, WonderCon. Least to say, this is really my most favorite convention ever. All the other conventions seemed to lack something, but honestly, SDCC seems to have a lot of things to make up for anything that it does not have. There’s just so much content, you’ll never have nothing to do. Anime Expo this year was extremely crowded, and for the first time, reached max capacity. That was a surprise. A very bad surprise. As there was very little content, even if you find that a panel has been completely reached capacity, you’re left with nothing to do. I got frustrated and bored, or maybe it was because I’ve been going to it for so long that there’s nothing interesting about it anymore? Dilemma. My only reason for going is social obligations to friends. However, I’m not going to get completely into this, as Comic Con has some of the most fanatical fans ever (overnight camping just for a panel?!) but even if there was a panel that was completely full, there’s still plenty to do inside the convention and outside of it.

For me, there was a lot of firsts. Initially it was very scary for me, as I am prone to getting lost and feeling extreme anxiety when I can’t visualize where I am. But I got over that learning curve pretty fast, like trying navigate around the city to find good parking. I got super excited on Saturday when I found great parking spots at a reasonable price — if thursday and friday weren’t so awesome, I would have been pretty pissed at having to pay $30 for parking for only 10 hours per day. That’s almost more bad than LA during Anime Expo…my wallet was quite sad, but you cannot imagine my inner triumph on Saturday and Sunday. Ha-ha! And also how tired I was at having to wake up early just to snag good parking. Least to say, I can check this convention off my bucket list. But I will hopefully be returning next year and with another buddy. I do things by myself quite often, and I don’t mind meandering alone down the exhibit hall and exploring by myself as this is something that I a relish, but sometimes, its just nice to share in that experience with someone else who is a comrade in your adventures — especially, with something like Comic Con. There’s a point where you’re just standing in line and you’re taking pictures by yourself, but then you see someone behind have a fun group photo, and you wish deep inside, “Darn, I wish my friend was here with me.”

I liked all the different booths though! This one is from the Outlanders booth for Starz. 😀

Also, can’t not be without an Adventure Time pic. :>

But in any case, I got a lot of productive things done, so going by myself was really more for expanding positive business connections.

I sacrificed watching the Once Upon a Time panel to get my portfolio reviewed by Nickelodeon, and hopefully, I’ll get around to applying now that I’m feeling much more confident about my portfolio. I’d been working extremely hard the following year to make a lot of new content. Such as my Bearskin project, which has been very positive as dark as it is — I recently got it published with Oxford University Press for their Kaboodle educational textbook — and getting around to designing Zetes von Boreas, the Harpy ship captain. Sometimes, I feel like I haven’t made much progress at all, but I had the opportunity to reflect a lot as I organize my portfolio pieces, that I’ve actually done a lot. However, this certainly won’t stop me from creating because there is just SO many ideas that I’ve yet to do. It is rather unfortunate that I never got around to pitching for Nickelodeon as I originally intended. There was a lot of factors on the days before the convention, and time simply ran out, but I am always working on my next story, so this isn’t too much of a problem. Hopefully, I’ll be much more prepared for the next opportunity that pops up.

I feel like I’m constantly busy, and after not being busy for a good while, its a very good change. I wish I could show off accompanying videos for my recent freelance stuff with Free Range Studios, but I think they’re not yet released, so I don’t really want to toot any horns while of my past projects may be still under radar.

But anyway! I’m also super excited that I got to meet some of the members of Girls Drawin’ Girls finally!

I did not once feel bored helping out at the booth and in fact, loved talking with my booth buddies. They’re awesome! I don’t know why its so much easier to help someone else sell, but I have trouble selling for myself at these things. ahahah… >_>

We had a very successful show at the Chuck Jone’s Gallery on Thursday night last week during Comic Con. Linda Jones, who the daughter of Chuck Jones was there doing signings. Pretty rad.

I got an awesome autograph from Dave McKean! He drew in my sketchbook. I wish he signed my name too, but I felt like these news reporters just butted in and he ended up having to rush the sketch in the end.

It was cool anyway. I’m really horrible though, as I knew I was supposed to really like him, but I could not for the life of me remember why. And then when I got home, it hit me that he did the covers for Sandman, which I looooove. I wish I cosplayed as Death that day… hahaha ..I also wish I had more to say to him when I saw him too.

The perks of going to SDCC is the fact that all the biggest artists in the industry usually come to these events, so I’m really lucky I got to see Stephan Martiniere and purchase a print. I actually had barely any time to visit all the artists as the exhibit hall was HUGE, and there were so many events happening all at once. It was difficult to walk through at times as well due to the humongous crowds. I need to find some space on my inspiration board to pin it up. I feel like when I pin up something I aspire to, it usually helps me visualize.

It was also great seeing all the creator content too, I like to see how the new age artist revolution is doing with all these independent projects in artist alley and small press booths. Going once really is not enough to fully immerse yourself, I feel like maybe a 2nd time will actually complete the experience. I feel like I need to go to all the creator content panels as I only got to see 2 or 3, one of which was how to get into the Gaming Industry. I really love hearing stories on how it all worked out for the people working in their creative fields.

As a newbie, it was all very overwhelming each day. My feet hurt, and my right knee as well after preview night and thursday — really wasn’t used to all the walking, since I’ve been a lot less active lately. In the end, I took the bus pretty much whenever I could. But sometimes, the streets were so crowded, it was hard to do.

But no pain no gain?

The night still had fun things to do, but as the days wore on, I felt much less inclined to stay out late, and much more eager to go home as early as possible to sleep and wake up early for the next day. I think next year, I will attempt to obtain a hotel room at a reasonably closer distance so I don’t have to wake up too early… 😛

I also got to connect with the president of ShinHan Art, and his wife, a really nice Korean woman, which I am pretty excited to test out as soon as I am not too busy with my freelancing. I will be writing a full review on the markers that I bought and comparing it with Copic markers — they’re basically very similar marker products so we shall see~! I’m also going to be testing out the watercolors shown here too, so yeahhh I’m pretty excited. 🙂 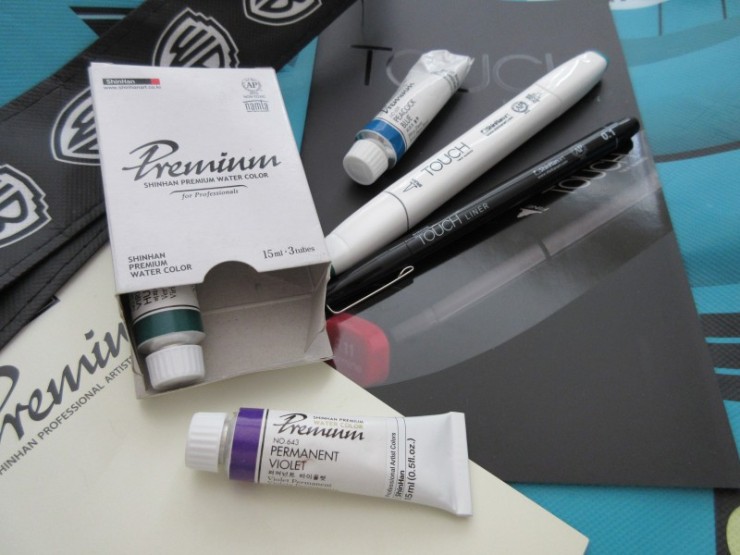 Today, I learned something new. I'm a worrier that's trying to change my own mind to believe in better tomorrow's. I've always been about moving forward, but I'm also a big dweller that knows how hard it is to let go of the past. The past made me, but am I a better person for it? I think there's always room for improvement. #setgoals #lookforward #studynotes #lifeplanner #positivethinking
So pretty much any of my good friends mostly know I've had this idea for awhile now. (An incredibly loooong time). This year feels like a good year to really focus on getting real content out for my personal project; as I focus more on graphics art, content, and storytelling. I'm hoping to publish something eventually, and will definitely be looking into a comic at a later time. The story is pretty much 90-95% fleshed out, with basically most of the base borrowed from Hans Christian Andersen, but he's dead, so I hope he likes it from his grave. Things just fall into place in 10 years, you know. #graphicdesigner #visualdesigner #storyteller #illustrator
Had a grand 'ol tome at @curastudios last night. 2020 is gonna be about doing what I've been thinking wanting to do and to keep focus on my end goals.

I’m a part of the Sketchbook Project!